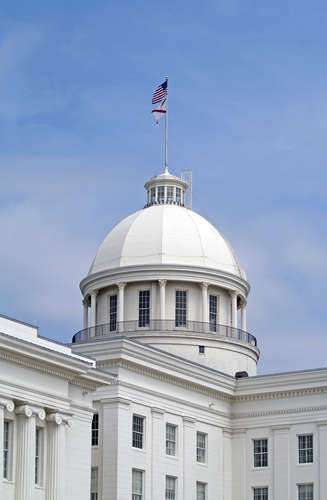 What is the Alabama Judicial Building?

A group of lawyers sued Chief Justice Moore because they claimed their clients may not receive fair hearings because of Moore’s personal religious beliefs.  The lawyers claimed that Moore’s actions violated the First Amendment’s Establishment Clause in the U.S. Constitution which calls for a direct separation of church and state.

The case concerning the Alabama Judicial Building was eventually brought forth in front of U.S District Court Judge Myron Thompson and received a huge amount of media attention.  Myron ordered the removal of what he called “a religious sanctuary within the walls of a courthouse,” and the case was appealed by Moore.

The case was affirmed in the Eleventh Circuit Court of Appeals on July 1, 2003.  Moore continued to refuse taking down the monument at the Alabama Judicial Building, and he was eventually suspended as Chief Justice.  The justices ordered that the monument be removed on August 27, 2003, and Moore was removed from office due to ethics violations in November of 2003.

You can reach the separate Courts at the phone numbers below:

Brief Outline of the Department of Licensing