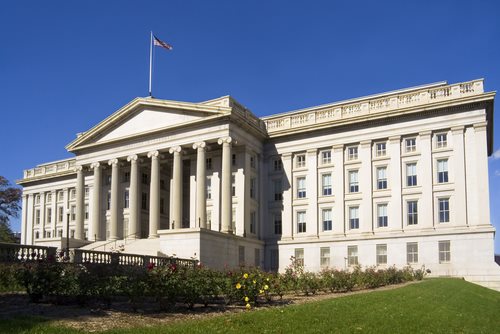 What is the U.S. Treasury?

A variety of departments exist under the jurisdiction of the U.S. Treasury; each of which maintains specific responsibilities and focal points with regard to their respective financial services; these departments include the United States Mint, the Internal Revenue Service (IRS), and the Office of Terrorism and Financial Intelligence:

The following details outline the administration of the U.S. Treasury:

The U.S. Treasury was founded on September 2nd, 1789; Alexander Hamilton was appointed by George Washington as the first Secretary of the U.S. Treasury

The annual budget afforded to the U.S. Treasury is estimated to range between $19 billion and $20 billion

The U.S. Treasury functions as a government agency under the Executive Branch of the United States government, which is comprised of 3 total branches; in addition to the Executive branch – which is responsible for the regulation and enforcement of operational legislation existing within the United States of America – there also exists the Legislative and Judicial Branches.

The following terms and terminology are oftentimes associated with the operations and undertakings of the U.S. Treasury:

the process and procedure of levying fees and funds whose payment is required to be furnished with regard to the nature and type of individual tax; income tax is defined as a required percentage of an individual’s earnings through employment or receipt of assistance from government programs. Sales tax is defined as a percentage levied with regard to the gross purchase price that is included amidst the commercial transaction in question – both the items eligible for sales tax, as well as the respective rate of sales tax vary in accordance to locational jurisdiction.

Department of the Treasury

A Guide to the Forest Service

A Guide to the National Security Council