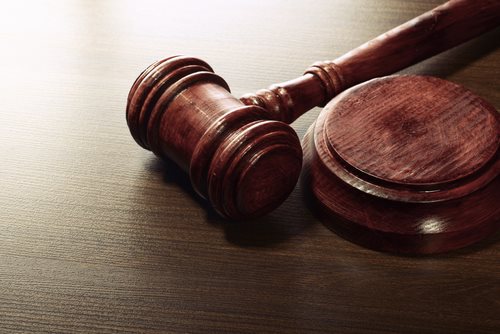 The adjudication definition refers to the formal legal process by which a judge or arbiter reviews evidence (including legal reasoning offered by litigants or opposing parties) to come to a decision in a legal matter. The majority of cases evaluated by the adjudication process involve small civil disputes or non-violent infractions posed by a victimized party.

The judgment delivered by an adjudicator (individual who acts as the judge in adjudication case) will ultimately determine the distribution of rights and obligations for the parties involved. The decision rendered in the adjudication process is legally binding, meaning it must be honored and fulfilled by all parties involved. Furthermore, the decision offered during the process may be appealed to a higher court system. In summation, adjudication was formed to better organize and increase efficiency in the court system; the adjudication process  prevents a number of claims from reaching the complex and costly higher courts.

Adjudication is distinct from other justice-seeking or evidence-based resolution formats; in particular, the process is only used to solve the following types of disputes:

Disputes between private parties, such as individual citizens or corporations (who possess a legal personality)

Disputes that arise between public officials and private parties

Adjudication occurs when a natural person, typically someone empowered by an agency to formalize a binding decision, is given the task of examining evidence or facts to render a legally-acceptable and affirmed judgment. As a result of this process and the broad definition attached to the adjudication definition, the legal process may refer to a casual form of judging, such as in athletic competitions, or to a more formal legal resolution, such as the procedures maintained in a dispute over an employee’s pay.

Adjudication, in the majority of cases, is binding and does not require the inclusion of a jury to render a decision in a civil trial. In the adjudication process, a judge will render a decision regarding the case only after all the evidence has been presented to the presiding body. This legal process is preferred by a number of institutions and individuals in the midst of a legal battle because is typically less expensive than a trial case and is far more expedient.

As stated earlier, a judge (instead of a jury) will typically settle disputes between parties in adjudication. Although the adjudication process is quicker and typically less expensive, the review of facts is generally thought to be less thorough and sympathetic when compared to a trial by jury.

In the legal sense, an adjudicator is not regarded as a mediatory, even though the two parties are required to come to terms or agree on a settlement to resolve a case. In the majority of situations, a mediator will help find a compromise between feuding parties, but they cannot force the parties to do so. In contrast, the legal adjudication process and the settlement it reaches, does require the parties involved to comply to the punishments or settlements outlined; the resolution the legal adjudication process reaches is legal binding.

Department of Labor and industry