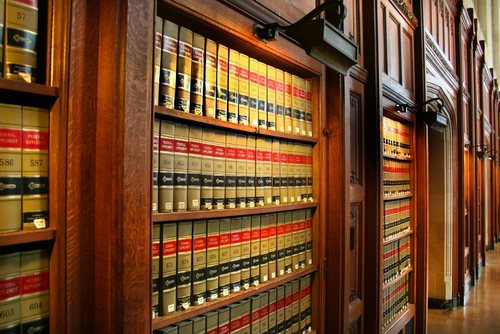 Public law is a branch of law that governs the relationships between individual citizens, including com

panies and the state (a governing body) in which they reside. In essence, public law is the framework that exists between citizens of a state and their functioning governing body. Public law establishes rules and regulations that affect how citizens function in their everyday lives and establishes (and subsequently regulates) the powers a public or governing body (administrative law).
Under this field of law exists the following sub-divisions: administrative law, criminal law and constitutional law.  Although these sub-divisions are a part of the broader field of public law, the general premise is at odds with the concept of constitutional law, which states that all laws should be specifically enabled and thereby sub-divisions of the United States Constitution.

As a general thought, private law is the field of law in a society that affects the relationship between citizens or groups without the inclusion of a governing body or the state. In many cases, the distinction between public and private is confounded by the laws that regulate private relations while having been passed by a governing body though legislative enactment. In a variety of cases, these public statutes are known as laws of public order, for private individuals do not maintain the right to break them or circumvent them.
What is Public Law 94-142:

All public laws are codified by the United States Federal Government for organizational purposes. One of the most well-known and regarded public laws is public law 94-142. Public law 94-142 is the Individuals with disabilities education Act. This piece of legislations is a United States federal law that is responsible for governing how states and various public agencies provide early intervention, special education and other related services to children with disabilities.

Public Law 94-142 aims at addressing the educational needs of children with mental and physical disabilities (the legislation divides the disabilities into thirteen ailments or conditions) from birth to age 21. Public law 94-142 was created to assist those individuals with mental and physical impediments; before the passing of public law 94-142 the mission to help these individuals was highly fragmented and inefficient.

Background of the Department of Health